One of the most popular four-stroke engines on the market today is the Saito FA-91. It fits perfectly in most .60 size airplanes designed for two strokes, yet has the ability to turn larger diameter propellers with much more thrust than a two stroke engine. 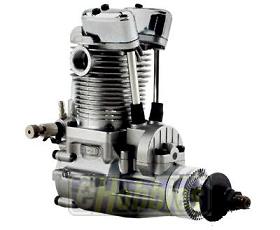 Well, Saito is now offering a new engine that has even more power than the .91, yet is nearly identical in size and weight. The nice thing about this engine is that it has the same mounting deimensions as the O.S. 91, which means that it can be used with most of the after market engine mounts that are available to fit this engine.

You can use a lot of different fuels with the Saito FA-100 engine. Recommended initial break-in is fuel that contains 20% oil, but later you should switch to 15% oil.